Turritopsis Dohrnii – Is It Really Immortal?

Most of the animals featured on the site are chosen based on their unusual looks. However, this not the case with Turritopsis dohrnii, which seemingly has no notable morphological characteristics.

On the outside, it looks like yet another small, bell-shaped medusa. What’s so unique about it is the fact that it exhibits a certain form of immortality, reminiscent of the life of Benjamin Button. T. dohrnii is able to cheat death at the very last minute, instead of dying it simply goes back in time and renews itself to become young again! Theoretically, some say this can go on indefinitely, effectively rendering the species biologically immortal. But how is this achieved and is the species truly immortal? Maybe “immortality” is just a poor choice of words?

The (theoretically) Never Ending Lifecycle of Turritopsis dohrnii
Like most other hydrozoans, a T. dohrnii individual begins its life as a tiny, free-swimming larvae called planula. A planula is a flattened, ciliated and bilaterally symmetric larvae that forms from fertilized eggs. In the case of the immortal jellyfish, the planula then settles down and gives rise to a colony of polyps that are attached to the seafloor.

These polyps then give rise to new T. dohrnii individuals by the method of budding. Budding is a form of asexual reproduction in which a new organism develops from the outgrowths of the polyp. All the jellyfish arising from the planula are genetically identical clones and eventually become sexually mature jellyfish that can reproduce sexually and lay new eggs.

Now, this is where things get interesting. If a T. dohrnii jellyfish is exposed to environmental stress, physical assault, sickness or simply gets too old, it has the capacity to revert back to the polyp stage, forming a new polyp. The polyp can then give rise to new medusas!

All stages of the medusa, from newly budded to fully matured individuals can revert back to the polyp form. During the transformation, the jellyfish first becomes a ball of tissue, the cells de-differentiate and then re-differentiate, and finally transforms into a hydroid, the previous stage of development.

Confused? Hopefully this will help: 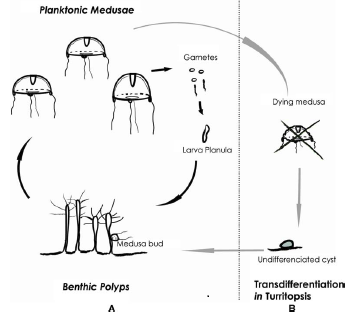 Theoretically, this process can go on forever, and this is why some say T. Dohrni individuals effectively rendered biologically immortal. Research in laboratory conditions has revealed that 100% of specimens can revert to the polyp stage. However, out in the wild, life is not that easy and most individuals succumb to predation, disease and other life-threatening hazards, well-before they have the time to revert back to the polyp stage.

Today, Turritopsis dohrnii is the only known species in the animalia kingdom capable of reverting completely to a sexually immature, colonial stage, after having reached sexual maturity as a solitary stage.

A different opinion
The truth is that not all researchers agree on the theoretical immortality of T. dohrnii. For instance, Rebecca Helm has made a well-rounded post over DeepSeaNews, suggesting (based on other jellyfish species that reproduce in a similar manner) that over the course of time, mutations and other genetic junk may build up in T. dohrnii clonal populations. Eventually these population get “tired.” and produce clones that are more fragile, possibly becoming unable to revert to the polyp stage at some point. She concludes that:

“While the “immortal” jellyfish Turritopsis dohrnii may be able to turn back its life cycle, it may not escape the inevitable slowing down that comes with age. In other words, while reversing your fate and escaping death for a short while may be a neat trick, it doesn’t guarantee immortality.” Source

Is “immortality” a poor choice of words?

First, I want to clarify that I am no expert in marine life, Cnidaria, jellyfish etc. Although related to biology, my field of expertise lies miles way. Having said that, I think that “immortal” [as many describe the species] is a really unfit word to describe T. dohrnii.  From what I perceive, a human version of T. dohrnii would be something like this. Just before dying, a human/T. dohrnii hybrid [let’s call him “X”] would first revert to a polyp-like zygote. Then, this initial zygote would divide into further zygotes like in the case of identical twins, and then these zygotes would grow into new human babies, each with the same genetic material of X. Eventually, these babies would grow into adults and look exactly like X, excluding of course any acquired characteristics like scars.

I can hardly consider this as biological immortality. Natural cloning would probably be a better word I think. Less catchy, more precise. But again, this is just the opinion of a non-expert. Don’t take it for granted.

Now let’s see what Ferdinando Boero has to say on the matter. Boero is one of the authors of a 1996 paper [2] that examined the life cycle of the Turritopsis dohrnii, which back then was identified as Turritopsis nutricula. The excerpt you are about to read was initially posted here as a comment:

“We did not speak about immortality, in the paper. We spoke about ontogeny reversal. Ontogeny is the series of steps that start with a zygote and arrive to the mature adult. Usually adults reproduce and then, sooner or later, they die. The hdyrozoans, with which Paul Raeburn is not very familiar with, start their life as a planula larva that settles on the bottom and gives rise to a hydroid colony. The colony buds off tiny jellyfish that, in zoological jargon, are also called medusae. The medusae are either male or female, they reproduce and then die. Reproduction gives rise to a planula that then becomes another hydroid colony, and the cycle starts again. T. dohrnii medusae, if subjected to sublethal stress, become a ball of tissue, their cells de-differentiate and then re-differentiate, and they transform into a hydroid. The previous stage of development. As I say in the article, it is as if a butterfly (the jellyfish) can re-organize its cells and go back to a caterpillar stage (the hydroid). So, ontogeny is reversed. This can be produced in the laboratory all the times you want.”

The medusa form Turritopsis dohrnii is bell-shaped and very small, with a maximum diameter of about 4.5 mm (0.18 in) and is about as tall as it is wide. Adults are about as wide as a human pinky nail.

The jelly in the walls of the bell is uniformly thin, except for some thickening at the apex. The relatively large stomach is bright red and has a cruciform shape in cross section. Young individuals are 1 mm in diameter and have only eight tentacles evenly spaced whereas adult specimens have 80-90 tentacles. 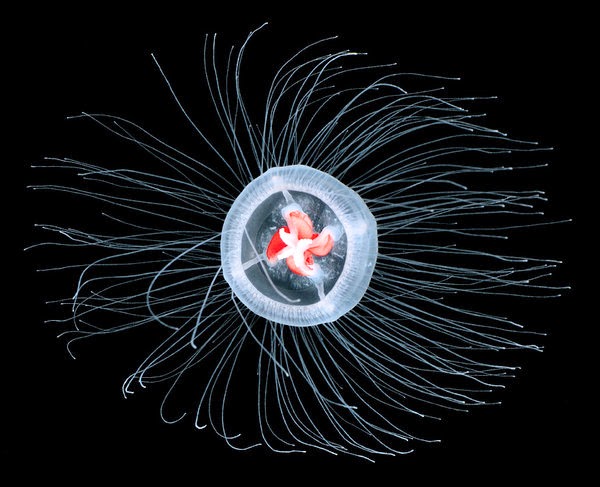 – The Turritopsis dohrnii’s cell development method of transdifferentiation has inspired researchers to find a way to make stem cells using this process for renewing damaged or dead tissue in humans.